(Excerpt from the short story, Mr. Lepescu by Anthony Boucher)

I am honored to be the Co-Chair of “Virtual” Bouchercon 2020, originally set to take place in the city where I live: Sacramento! As most of you know by now, due to an abundance of caution over COVID-19, the Conference will be held virtually. Above you will find the link to Registration and Bourchercon2020 site!

In 2007, I was managing a large social justice legal services organization in the San Francisco Bay Area and working on my first book, a mystery.

Several of the attorneys, both staff and volunteer, were mystery buffs and when two of them found out I was a wanna-be mystery author they took me to lunch to meet a friend who worked for a publisher. That lunch was the first time I heard the word “Bouchercon,” then being held in Anchorage, Alaska.

Fast forward to 2012. I retired from my day job, had written and published three books— one mystery and two paranormal romances—and Left Coast Crime blew into town, Sacramento. Of course, I had to go, not only was it a mystery convention, but two of my friends, Cindy Sample and Robin Burcell, were putting it on.

By 2014, I was the president of the sisters in Crime online chapter, the Guppies, and in order to actually meet my Steering Committee members, had to go to Malice Domestic. But first, Left Coast Crime was in Monterey, and I never miss a chance to go there!

And to top it off Bouchercon was in Long Beach. Five of us piled in two cars and did a road trip to what would be our first Bouchercon.

On the way home, I drove while Rae James rode with a yellow legal tablet on her lap and by the time we got to Sacramento, we had outlined a complete Bouchercon. Well, a few details needed to be worked out, like when we’d hold it and exactly where, but over the next few months we met with the Visitor and Convention Bureau, the city of Sacramento, the two major downtown hotels; researched who had been Guests of Honor and who hadn’t, invited about 30 friends and fellow mystery buffs to a planning meeting, whittled that group down to a group of 15 or so who would do the actual work, and put together a bid. The bid was presented to the Bouchercon National Board in Raleigh, NC in 2015, and we were in the conference business!

Over the past five years I’ve been to Bouchercons in New Orleans, Toronto, St. Petersberg and Dallas and to Left Coast Crimes in Reno, Vancouver, and San Diego (missed Honolulu).

I’ve volunteered, taken notes, watched what worked and what didn’t work so well, interviewed attendees in elevators, panel rooms and bars, about their best and worst experiences and asked for suggestions.

As the co-chair for Bouchercon 2020 in October in “virtual” Sacramento, our team is putting together what we’re planning to be the gold standard of Bouchercons. We want to give the 1,600 or so attendees one of the best, most memorable conventions.

Although it’s been a lot of work and a ton of details, at the closing ceremonies in Dallas in November 2019, I looked around the room and realized there were almost 1,700 people who’d put their lives on hold and spent time and money to come together for four days to celebrate their love of mysteries.

4 thoughts on “Bouchercon, “virtual” Sacramento and Me” 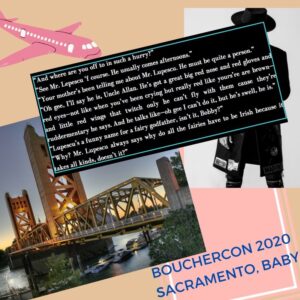